(To view our January/February 2017 issue of ClubWEST online, click here.) 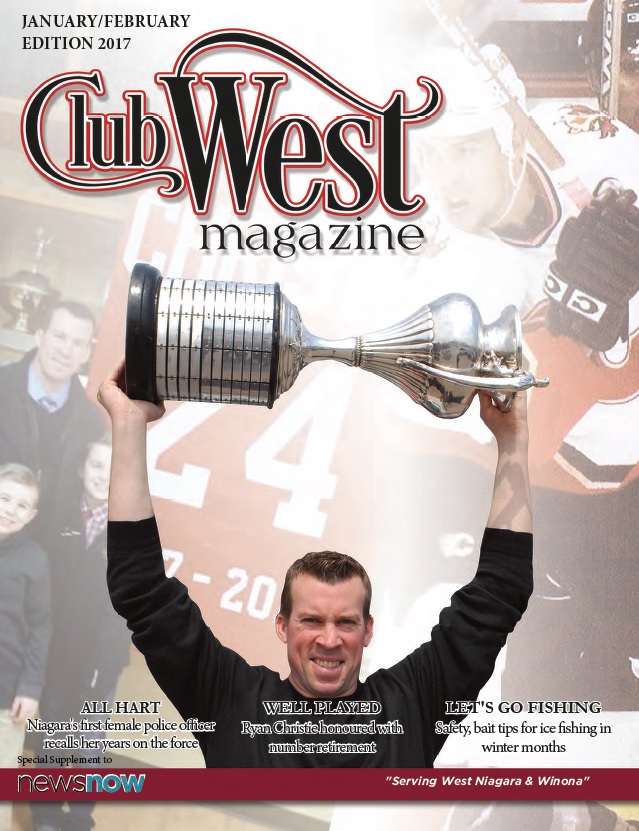 This edition’s two lead features are about two very different people who got to do something that they loved for a long period of time.

One could not get much more polar opposite than professional hockey player and police officer, but that is what we have in Ryan Christie and Dorothy Hart.

One thing their endeavours did have in common was super high highs and devastating lows – life, in a nutshell.

For Ryan, it was one sucker elbow which changed his life. He went from a young, aggressive kid trying to make it to the bigs, to a scared player with no confidence on the ice.

Dorothy had many highs on her job as a community service officer for much of her career, but she also worked uniform patrol in St. Catharines.

Her greatest satisfaction may have been the fresh young faces which would come up to her at a school presentations and say they were inspired by her to go into law enforcement. The low, without doubt, was the murder of her teenage son – Grimsby’s first murder.

Between those highs and lows they both met a wide cast of characters and both will tell you they appreciated every minute of it. Both are also examples of hard work and tenacity.

Ryan invested years to get a shot at the NHL. Skating drills, strengthening programs, positioning – all the key points any player can work on to improve. To do that for more than 10 years at the pro level in a host of cities and countries…now that takes heart.

Dorothy, who found herself hired with Grimsby’s police department, whose basic work record at that point was housewife, knew she had an opportunity and did everything to capitalize on it. As she noted, she would attend any training program to which the department, both Grimsby and later Niagara, would send her. She put in her time and when she was called upon for street duty, she was ready.

Both of these people are great examples of work ethic, a quality not as commonly found as it once was. In this day and age of immediate gratification, a precious few people are willing to pay their dues to get their shot. This has been a big reason we now have such a disposable society, it would seem.

When people don’t appreciate what they have, it is easy to discard it and move on. That is something Ryan and Dorothy never did and their successful career paths can be an example to all.