(To view our July/August 2017 issue of ClubWEST online, click here.) 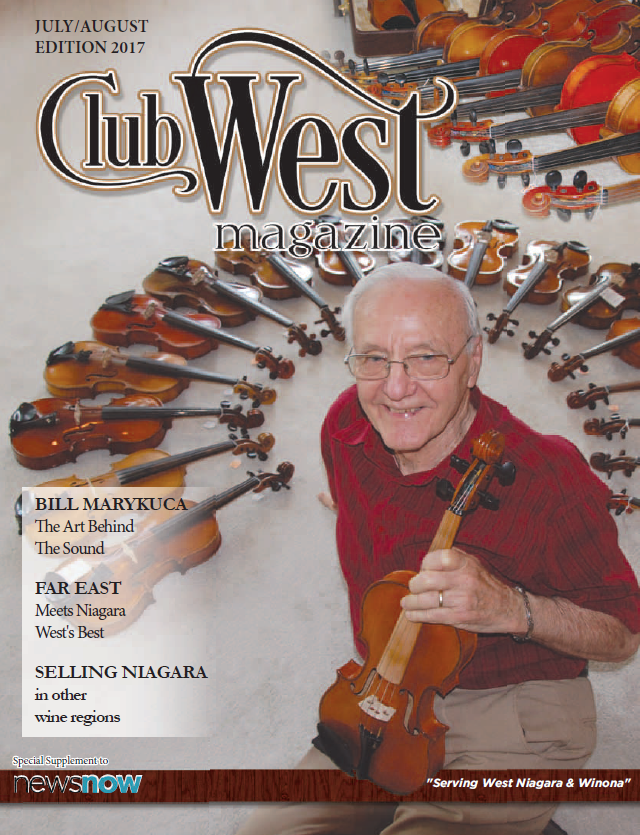 In my line of work – on a daily basis – calls, email, and drop-ins at the office are received, many of which start with, “have I got a story for you”.

Such was the case when shooting photos weeks ago for Lincoln Garden Club’s plant sale in Vineland.

Louise Marykuca tugged on my arm as I walked by and said, ‘If you’re looking for a story, you might want to talk to my husband. He makes his own bows and is quite accomplished.”

My first thought was “bow ties?”. Little did I know….Thinking it through and listening to her story, it sounded like a neat little feature, so I put it in motion.

Then when I read the story which Joanne McDonald came back with, the feature took on a life of its own.

That is a great read!

Bill Marykuca really is a gifted man. Few people can build a major going concerned from their garage, but he did it with Red-D-Arc. Few people have a natural talent for craftsmanship, too, but Bill explored the world of violin and bow making in 2000. Sure enough, that hobby took off and he quickly became renowned for his creations.

At the other end of the spectrum, we have Samara Vandersloot. She is just getting started. At 18, she has been to Nunavut, she is working on modelling and, in the meantime, she is taking part in Junior Team Canada’s trade mission to China this summer.

I don’t know about you, good reader, but I was more worried about my weekends when I was 18 than career establishment.

Maybe when Samara is ready to travel for leisure she may call ClubWest’s new travel writer, Lorraine Simpson.

As a former resident and merchant on Main Street in Jordan for many years, Lorraine is keenly aware of the interests of Niagara West residents as well as the tourist set. Her experience in world travel is second to none and Clubwest readers will see – first-hand – some unique and off-the-beaten path locations to which they may choose to visit in the near future. Her stories will inspire the lengthening of bucket lists across Niagara West you can be assured!

And with this edition, ClubWest wraps up its third full year of publishing.

A ton has materialized and changed in three years including the popularity of this publication. It is great to see voracious readers lined up in the office to get it on the day it comes out – in case they aren’t among the 15,000 who get it at home. We love doing it and we’re glad our readers love it right back.