(To view our May/June 2015 issue of ClubWEST online, click here.) 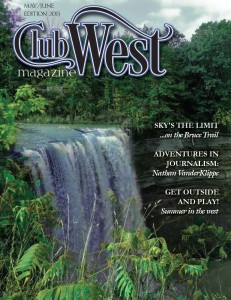 As an avid Globe and Mail reader – kind of have to be since I got my newspaper industry start there – I was not surprised and highly pleased to see the name of one Nathan VanderKlippe pop up last month as the recipient of the 2014 Amnesty International Canada award, honouring outstanding reporting on human rights issues in Canadian media.

Back in the good ol’ days of owning another paper in Niagara West, Nathan came to me looking for a summer gig – as about 25-30 students do every year.

Bright and talented? Absolutely. Equally shy, though. I have seen some very good writers who simply could not survive in the publishing game because they could not overcome that shyness. If you don’t have the ability to stick your nose in where it is not welcomed from time to time, you would never be able to cut it as a journalist at any level.

To do a proper job, one cannot be a hugs and sunshine reporter. Readers need some meat on a story’s bones on occasion.

So that was the only question regarding Nathan and his future.

Me thinks he proved his point and more with this award.

His family is very proud I am sure, and they should be. It is nice to know I was able to give this outstanding reporter his start with his first paying gig. As always, Katherine Grant has done a great job highlighting some of his exploits. I think you will find it an interesting read.

And what spring edition of any publication worth its salt would not include features on some things to get readers off their couches and into the great outdoors?

Niagara West residents are spoiled having so many unique and picturesque conservation areas in their collective midst, to say nothing of the majestic Niagara Escarpment.

Enter George and Sylvia Prins. There are a lot of folks who enjoy a good walk and still others who might consider themselves more adventurous….so much so they take on the escarpment on a regular basis.

Few would march the entire expanse of the escarpment from one end to the other. Now that is a worthwhile project, complete with a bear encounter!

Now, if you planned a hike after whipping up and packing the tasty lunch – following Chef Jan’s frittata with chive pesto and chicken soup recipes – you would really be onto something