(To view our July/August 2019 issue of ClubWEST online, click here.)

For Fire Chief of The Year – Mike Cain
By Mike Williscraft 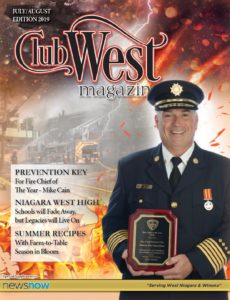 It’s not easy bucking a 100-year trend, but Grimsby Fire Chief Mike Cain has been doing exactly that.

Not only has he been going against the grain of traditional beliefs and traditional views of firefighting, he had significant success.

This success drew the attention of the Ontario Municipal Fire Prevention Officers Association, which bestowed the 2019 Fire Chief of the Year Award on Cain during its annual convention last month.

“I was very surprised,” said Cain from his office at Grimsby Fire Station 1.

The question is, though, should he have been?

Granted, there are 440 municipalities in the Province of Ontario with fire departments, so there was plenty of competition, but few, if any, have the varied background, employment history and intensely consistent history of driving home the point that prevention is THE way to go when it comes to firefighting.

For Cain, it is not about the great things firefighters do when actually battling intense flames and smoke-enveloped buildings – although he is quick to heap kudos to his dedicated crew. It is about education, awareness and planning which can prevent fires, injury and death.

He has seen all that in his decades of service to Grimsby Fire, which goes back 30 years to when he started as a volunteer firefighter.

While most people in town would recognize Cain through his work with the department, the fact is he had several careers before getting into senior roles with Grimsby Fire.

After growing up in St. Catharines and graduating from Sir Winston Secondary School, Cain graduating from Fanshawe College (Construction Engineering Technology); Dalhousie University (Certificate in Fire Service Leadership, a Specialty in Human Resource Management), and; Brock University (Certificate in NextGen Municipal Leadership Program). These do not include the plethora or one-off courses related to firefighting.

When just out of school, Cain started his own home renovation company, which operated from 1983-1989, then he took a position with Town of Lincoln as a building and plumbing inspector.

After working for one year as a consultant in Toronto, Cain returned to a Town of Grimsby job, again as a building and plumbing inspector.

When a position at a prestigious consulting firm came up – the firm which develops the fire safety codes which Cain now lives by – Cain had to take the shot, and he did, going to work as a technical consultant there for two years.

Two more years of the Toronto commute proved enough, and Cain seized the opportunity to return to Grimsby as the chief fire prevention officer. After two years in that position it was on to the Deputy Fire Chief position (2004-2009) and was promoted to Fire Chief in 2009.

That education and work history barely scratches the surface of his six-page resume but it gives one an understanding of just how long the road to knowledge can be. Cain’s varied background in the building trade gives him an excellent understanding of how structures are put together and, by extension, how to strategize when fighting an active blaze.

But all the knowledge in the world, on occasion, still does not help.

Case in point, the infamous blaze which destroyed three buildings in downtown Grimsby in 2017.

“That was preventable,” said Cain.

And prevention was the only way that fire could have been stopped given the century old construction with which they were built. That fire burned from a fence in the rear of one building expanding its way up into the roof and walls in no time. Once it accessed those locations, it proved impossible for firefighters to get ahead of it and the operation became damage control as the structures were reduced to rubble over the course of an afternoon.

“We have great suppression crews, highly respected, and as well they should be, but the best way to improve fire safety is through prevention.”

While it may seem like simple common sense, it is a bumpy road to navigate since the reputation of firefighters generally precedes them in the community.

“Firefighters are heroes by reacting to circumstance,” said Cain, “and, on occasion, they do amazing things.”

“But far more lives can be saved through prevention. It has taken a long time to get this belief embraced.”

This difficulty comes from the general public, those in the industry and even in municipal governments.

“When budgets are set, typically, money goes into suppression. We have tried to reverse the traditional paradigm. Fire code enforcement and prevention are key,” notes Cain.

When completing a nomination for Chief of The Year, Grimsby’s fire prevention officer, Paul Kucharuk, cited 24 different programs the department utilizes all to raise awareness and drive home the need for prevention to young and old alike.

As well, it is noted that Cain implemented a policy under which all volunteer firefighters are trained as fire and life safety educators so no matter which firefighter gets asked a question – whether it be during their presence at the Grimsby Farmers’ Market or at a stop in a grocery store, everyone in the department would be able to field questions in a knowledgable manner.

If prevention programming is working, it should result in a reduced call workload on the department.

“We will never stop fires. As long as people occupy buildings, stuff will happen,” noted Cain.

“It’s what you do about it that will ultimately determine long-term successes.”

Among the initiatives Grimsby has implemented is a detailed awareness program as part of its annual open house during Fire Prevention Week in October.

As noted in Cain’s nomination: “Grimsby holds a Fire Safety Day annually in September and it is a huge success with 800 plus in attendance. The entire fire department participates! Children learn fire safety through various stations such as Get Out Safely, Stop Drop and Roll, Calling 9-1-1. Adults learn kitchen safety, escape plans, importance of working smoke and CO alarms and fire extinguishing training. A live burn demonstrates how quickly fire spreads. Fire safety materials promoting the NFPA prevention week theme are available to the children and adults. A Fire Safety Day is not complete without a BBQ. All free to our citizens sponsored by the Grimsby Fire Department! Local news media advertises the event and attends taking photos for print media.”

It should not be lost on the community that the Fire Safety Day is held within the confines of Grimsby’s Station 2 – another aspect of the chief ’s planning.

“Fire Chief Cain had a vision. His vision of building a Training Facility began in 2007 when he was Deputy Chief. He endlessly pursued this vision and finally gained the support of Town Council in 2015 when they committed to sharing in his vision. In May 2017, Chief Cain’s vision became reality with the grand opening of the Grimsby Regional Training Centre (GRTC). The GRTC was designed with Fire Station 2 on one side and training facility on the other. The interior training side houses four classrooms, commercial kitchen and a lab, while the exterior training facilities include a training tower and eight burn cells with an additional area for vehicle extrication and vehicle fire investigation. GRTC is referred to as the ‘Centre of Fire Prevention and Public Education Excellence’. Based on Chief Cain’s belief that fire prevention is the future of our industry, GRTC (and for 2 years before its establishment) has been offering training to the fire services and Grimsby’s community partners and organizations,” reads his nomination form.

“It’s about modifying people’s behaviour reprioritization, just as we did with the blue box programs,” Cain pointed out, adding it was many years before recycling efforts had any support, but now there are grey and green boxes added to the program for cardboard/boxes and compostable materials respectively.

Part of the problem is people can be somewhat lazy in their consideration of implementing fire safety measures, often due to historic successes of firefighters.

“People are very confident in their suppression crews, and they should be. They

But just as times change and it would be wise to shift focus to prevention, this thinking should be magnified by the knowledge of how today’s buildings are constructed.

Bringing his vast knowledge of building structure to the fore, Cain cited many design elements and changes in materials which make fighting fires in modern structures much more difficult and even a relatively small fire potentially deadly.