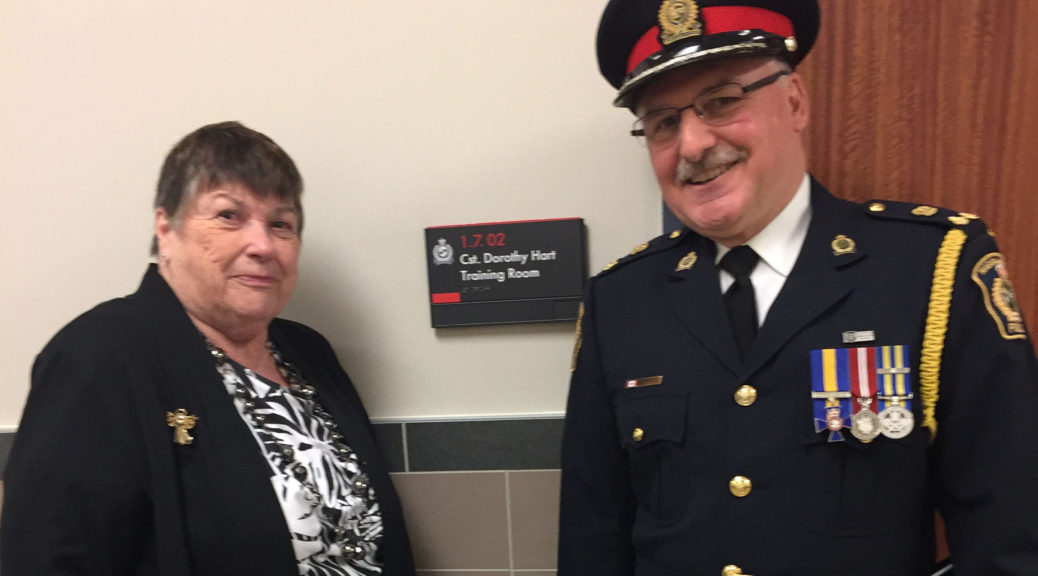 (To view our January/February 2017 issue of ClubWEST online, click here.)

Niagara’s first policewoman, Dorothy Hart of Grimsby was honoured with a room dedication at the new police headquarters

And in 1964 Dorothy Hart had that going for her when she walked into the Grimsby Police Department and applied for a job after seeing a notice in The Grimsby Independent.

“There was another person, Ray Wagner, who was also there for an interview. He asked me if I thought I would get the job. I said, ‘There are four other girls ahead of me. No way’,” recalled Hart, while seated at her kitchen table, filled to overflowing with career memories of her life as Niagara’s first female police officer.

“The next day I got a call and the man said, ‘Officer, can you come down here and try on your uniform?”

That was September 1964. Her first chief was Alec Earle, “my favourite”, she noted. As for Mr. Wagner, he went on to have a distinguished 35-year career of his own with the police force.

From that moment, Hart was a dedicated member of the force and focused her efforts on every bit of training she could access.

She realized she did not have the background some of the other officers had and she wanted to make up ground.

Grimsby was a very different community then. There were no traffic lights and pedestrians could walk across the QEW like it was any other road. Her initial duties were as a crossing guard and community service officer.

In 1968, she was transferred to regional police from Grimsby, a move she really did not want but she was told they needed a police woman and they wanted her. It was not until 1973 that three more women were hired by the department, so Hart had to cover a lot of ground when a female needed to be searched, for example, she said.

“I had taken every course they’d send me to, so I was prepared,” recalled Hart.

One of her first calls when working the beat in downtown St. Catharines was at the Welland Hotel – now a student residence at the corner of Ontario and King Streets in St. Catharines.

For the complete article, click here for Club West Online.