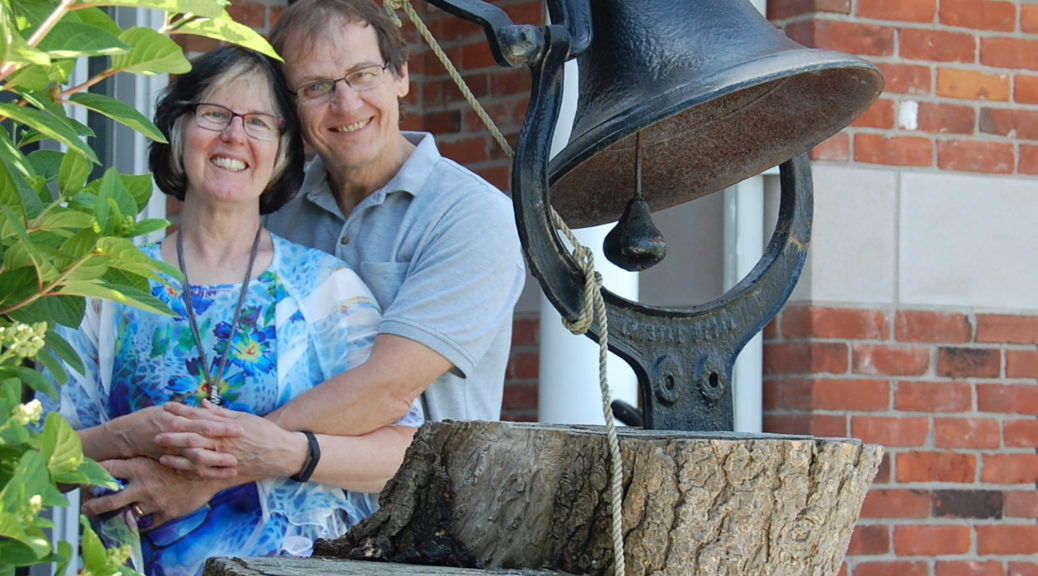 (To view our July/August 2018 issue of ClubWEST online, click here.) 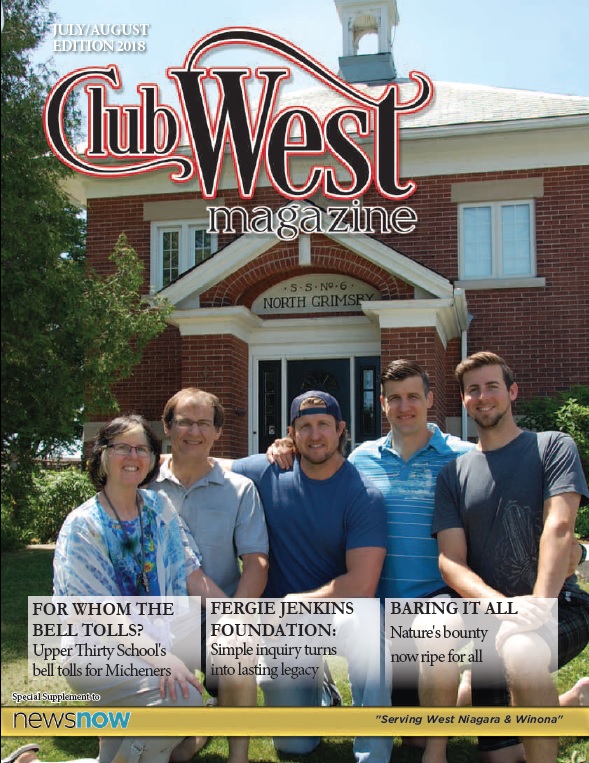 It took 40 years, but Evelyn and Mark Michener have finally graduated from North Grimsby S.S.
No. 6.

And through the decades, the drywall and the dust, they created a magnificent and unique home, raising a family under the bell tower that for many years summoned the Upper Thirty community kids to class.

The ringing of a school bell will always call them to home. Cherished memories, kindred ties and lots of hard work – the Micheners have lived life to the fullest under the slate roof of the school house they’ve called home.

Now 40 years later another epic brick has been added to the school’s rich history. The house has been sold and the Micheners are moving on, taking their memories, but leaving a big part of their hearts, family history and the dedicated labour that has allowed the beautiful historic building to be preserved for the next chapter and a new generation.

Before packing up for the move, the Micheners extended an open invitation to the entire community to tour the house – former students, historians, neighbours, everyone was invited to visit during an open house held Sunday, June 24.

“We wanted people to come and share their connections, memories and memorabilia,” said Evelyn. There is more information on the Facebook page – The Upper Thirty School Centennial North Grimsby. S.S.6

Next year, 2019, marks the centennial of the Upper Thirty School, located at 498 Elm Tree Road East, Grimsby (corner of Thirty Road) and the family wanted to celebrate this landmark before they move.

It was a hard decision to pull up roots, but the three Michener boys, Andrew, James and Stephen are grown, and Evelyn and Mark reached a point where they no longer needed so much space.

“In our hearts we wanted to drive by and see kids playing out in the yard again. It was a beautiful place to raise a family in the country on an acre,” said Evelyn. The family buying the school house have two youngsters and undoubtedly, they will take great glee in sliding down the school’s original iron banister handrails.

Much has been written about the school’s history, an inheritance which the Micheners have treasured and respected throughout the renovations, restoration and years raising their family.

First came Andrew, born in 1980, then James in 1984 and Stephen in 1988. Mark and Evelyn were kids themselves, 23 and 22, when they purchased the school house at the corner of Thirty Road and Elm Tree Road E., Grimsby.

“You really should look at it,” said Mark’s father Lavern Michener when the property came up for sale by the school board in 1978. “It was a project my dad always dreamed of,” said Mark and they worked together every night after supper and weekends.

Moving from their home in Beamsville, the young couple lived with Mark’s parents Lavern and Nell Michener in

Beamsville for four months. Mark was an electrician working with his dad at the time. Evelyn had just become a dental hygienist and graduated that same year.

“It was boarded up with grills on every window in the basement, one large room with 13-foot ceilings and a basement,” said Evelyn, adding that her only condition to purchase the school house was that the glorious huge windows that open to the east in the kitchen would stay.

The school house was still structurally sound and the original slate roof has been repaired and maintained, but inside, they stripped the school to the walls. It was lathe and plaster and had no insulation. They insulated, put in false ceilings, built partition walls, added plumbing and rewired the house. Indoor/outdoor carpet was pulled up revealing original maple floors, which today still bear the screw holes where the desks were placed. They replaced the old

Lincoln furnace with an electric furnace.

The boys’ and girls’ cloakroom was extended to become a bedroom. The teachers’ office was the nursery. The door has since been removed and the space serves as a nook off the kitchen.

The basement renovations were started in 1983 and an addition, built by Hendriks, was added in 1993. While Hendriks constructed the exterior, Mark did the interior work from drywall to electrical and plumbing, and installed maple flooring to match the original school. By then Mark was working as an electrician at West Lincoln Memorial Hospital and would later become head of maintenance.

The original bell tower was returned to the house in the 80s. “We got the bell tower back, the new owners can find the bell,” Evelyn said.

A newspaper clipping dated July 2, 1988, written by David Cuthill, and information shared by Bill Sobye in his news column Around the Kitchen Table, recorded that Goldie and Harold Aston, who lived in the white frame house at the corner of Ridge Road and the Thirty were the keepers of much of the school’s history.

“Perhaps it was because she boarded the teachers that taught at the U.S.S. #6 that created her interest in the history of the school,” Sobye said of the local historian in his article. Goldie preserved many priceless photos and documents about the community and the school. According to the article the first Upper Thirty school was built around 1800. It was constructed of logs and lumber was supplied by John Beam, who had a sawmill on the Thirty. “In the late 1850s there was a squabble in the community about the location. A vote was taken and those wanting it moved to the corner of Elm Tree and Thirty road, north of the cemetery, won. There are bitter feelings, but the move proceeded. The school was left on the side of the road when night set in and during the night it was burnt, no doubt by the sore losers,” Sobye wrote.

A new frame school was build at the corner of Elm Tree and Thirty road and was opened in 1859. This school served the community until 1919, when the new brick school was built right behind the old frame school. The school closed in 1965 and after being used by Community Living and the local cadet corps, it was boarded up. “The Michener family rescued it and turned it into a beautiful and comfortable home Sobye said, thanking Mark and Evelyn in his article.

Like any busy family, the years passed swiftly, each day beginning with the light pouring through the beautiful kitchen windows where the three boys sat around the table for breakfast.

“We didn’t notice the architecture,” said James, now living in Toronto. But it was unique to live in a school and local landmark and all the brothers credited childhood adventures for their adult appreciation of history and preservation of the past.

“The windows broke just the same as in any house,” recalled Andrew, now a father of two and living in Moose Jaw, Saskatchewan.

As youngsters they slid down the school’s iron banister handrail and as young adults, memorized every creak in the floors for safe landing after curfew.

When someone asked where he lived, Stephen, who now lives in Fulton, only had to say, “the old school house on Thirty.”

Evelyn can still see three little boys, standing on tiptoe on three turned-around chairs to see out the classroom windows and watch the traffic go by.

“The old ‘abc’ school house, the cradle of the mind, at least where it first awakes to a consciousness of its powers and its responsibility of improving them, is hardly less dear than the mother’s cradle where its infant body was rocked,” noted an academic writing in 1859 in the North-Carolina Journal of Education in his plea to build a school for local children of the era.

“Build….. a comfortable school house. Let it crown a gently rising eminence with an ample play ground, first trees to catch the first breezes of Heaven and convey them to the fevered brows of the studying children in summer,” said ‘Professor Owen.’

Close to a century later, it could’ve been written for the Upper Thirty which crowns a hill and catches the summer breeze.