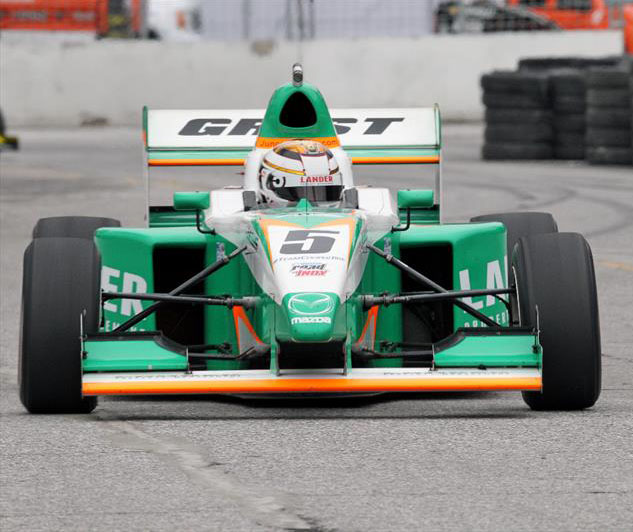 (To view our July/August 2015 issue of ClubWEST online, click here.)

The photo on the Juncos Racing web page shows a race car driver standing proudly on his car, arms raised in triumph as the crowd cheers. He has just won the Pro Mazda Grand Prix of Toronto, the first Canadian to win an Indy car race in Toronto in a decade making the victory all the more sweet.

Then, off in the distance, as he savoured his victory, he heard a voice shout out “Grimsby loves you!”

The driver is Garett Grist and he is, indeed, from Grimsby.

Last month’s win was prestigious but it was by no means his first. It was the fourth career Pro Mazda win for the 20-year-old who has been racing for three-quarters of his life, racking up an impressive list of wins.

“Toronto was a great weekend for us. We were consistently fast all weekend and were able to qualify second and first. In Race 1, I overheated the front brakes and only had rear brakes for half of the race which really hurt me. In Race 2, I was able to lead a lot of laps and win the race. It was so great to be able to win in front of my family and friends at my home race. The Juncos Racing guys did a great job all weekend and gave me a great car,” said Garett of the most recent win.

From the Juncos Racing website: “Garett was on point all weekend long. He had his strongest qualifying performance of the year, which he converted into a victory. The team believes that Garett can carry this newfound momentum into the
remaining races and potentially
challenge for the championship.”

Then, of course, there was the rain to contend with on that day – with which he has experience – and the travel at speeds of 140 mph; and then there were those concrete walls on both sides… but little seems to phase Garett. He knows what he is doing, puts in the time needed to develop himself as a driver and is both
realistic and passionate about the sport he loves.

Garett got his start cart racing when he was about six. Parents Jeff and Helen were looking for something to keep their only child busy and happy. As it wasn’t looking like he was going to get very tall, football and hockey seemed poor choices. So carting looked like a good option, says dad Jeff. “It was either racing or a jockey.”

At 5 ft. 6 in. and 115 lbs., Garett might not have made much of a football player, but he was the perfect size to take the wheel.

“I have seen every lap he has ever done,” says his dad. Right from the start, Garett was a natural, winning races and tallying up the championships. Then came the moment when the kids lose control, go into a spin and scare themselves. Sometimes they lose the nerve to race.

Garett had his moment but, if there was any fear, it sure didn’t last long, says Jeff.

“We travelled throughout the United States and Canada and lived a lot of nights in our trailer,” says Jeff.

The go-cart years, he added, were a lot of fun, now racing is a major enterprise.

Racing as a young boy and throughout his teens made for a complicated balancing act at times, but also helped him develop needed self-discipline. In spite of missing a lot of days in high school – to compete in races in Italy, Egypt and England in Grades 9 and 10 and 12 – Garett graduated from Grimsby Secondary School.

“I just had to put in the time and get caught up to graduate,” he said.

Life as a young race car driver is everything it’s cracked up to be and then some. He made the move from karts to cars five years ago and has won races every one of those five years.

His goal is IndyCar.

“The thrill of the speed; the precision of the perfect lap; the competition,” said Garett of what he loves about racing. He also loves to win.

And then there’s the social aspects of racing….

He has formed some lasting friendships including one with Canadian IndyCar driver James Hinchcliffe.

“He is a good friend and mentor. We are really close. He has helped me along the way,” said Garett. “Considering what happened, he is doing good.”

Hinchcliffe, who is from Oakville, was seriously injured in a major crash during practice laps in May at
Indianapolis Motor Speedway.

It was the fourth wreck during practice for the Indianapolis 500 that week. At about an hour into practice his car spun hard into the wall, leaving Hinchcliffe in pretty bad shape and heading into surgery on his leg after losing a great deal of blood. But it could have been much worse.

“The cars are safe. They are made of thick carbon fibre,” said Garett, who has had a couple big crashes of his own.

Crashing isn’t something he thinks about when he is out there.

“There’s no point in worrying about it.”

The whole team keeps the cars in top running order, and to keep them safe.

“It takes a lot of guys to run a program,” said Garett giving credit to the tires guys, engineers and mechanics. His Pro Mazda green and white #5 car has a 240 hp Mazda Renisis rotary engine, and weighs about 1,200 lbs.

Driving can be taxing and is physically demanding, so he works out to stay in shape, doing weights and getting in a game of basketball just for fun when he gets the chance.

“There’s no power steering or power brakes and there is a lot of force pushing you down,” he said.

The next step for Garett – now that he has a few years under his belt – is the Indy Lights, the third and final step on the Mazda Road to Indy.

“I feel like I’m ready to move up,” said Garett, who has five more races this year.

At one point he had considered making the move to Europe to race but there is no direct way to Formula One racing there.

The Mazda Road to Indy is the only driver development program in the world to feature a champion’s scholarship at every level to advance to the next step on the ladder system. The Pro Mazda Series champion is awarded a $750,000 scholarship toward the Indy Lights Series. The Indy Lights Champion gets a program to move into the Verizon IndyCar Series with three guaranteed races including the Indianapolis 500. Team and driver prize packages total over $1.9 million.

Indy Lights has produced some of the Verizon IndyCar Series’ biggest names during its 28-year history.

Its graduates include Marco Andretti, Helio Castroneves, Scott Dixon and Tony Kanaan to name a few.

More recently, several Indy Lights champions and front-runners have gone on to pursue their dream of racing in the IndyCar Series and the famed Indianapolis 500.

Garret made the move to Indianapolis right after Christmas as the next logical step in his career.

He lives with his manager, former F1 driver Derek Daly and has other drivers living close by.

“I am loving it, it is definitely something I want to do for the rest of my life,” he said.