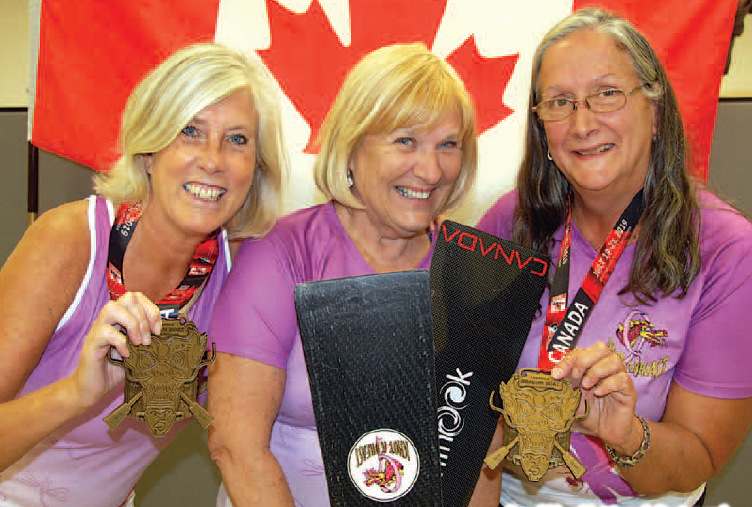 (To view our November/December 2019 issue of ClubWEST online, click here.)

By By Joanne McDonald 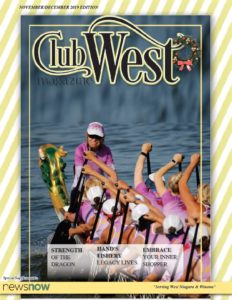 Dragon boaters don’t worry about what’s behind them.

“We focus on what’s ahead. We focus on the finish line,” says Lorraine Martin, sharing as one the thoughts of every breast cancer survivor who dips a paddle in perfect sync with her sisters in the competitive sport of dragon boat racing.

Both on the water and in life, it’s true for every member of the Knot A Breast (KAB) dragon boat team. They never look back.

“We look forward to see what’s coming and anything is possible,” Martin said.

They have the strength of the dragon.

It’s one thing to read about dragons and quite another to meet them. World champion athletes, KAB dragon boaters Martin, a Beamsville resident, Kim Short of Smithville and Judy-Anne Sleep of Grimsby are empowered by the demanding sport and they inspire others who are going through the same journey.

They have stood on the podium multiple times as athletes and winners. They are a spirited bunch. They are fiercely competitive.

And this summer, they’ll be on the water in France to compete for the 2020 Club Crew world title.

This is one competitive group of athletes and all the hard work has paid off.

“It’s a whole other level for us,” said Martin. “We won the International Breast Cancer Paddlers Commission (IBCPC) three times in a row, 2010 in Peterborough, 2014 in Florida, and 2018 in Italy, and now look forward to the challenge of the Club Crew world championships.”

In 2010, KAB placed first overall in the International Breast Cancer Participatory Festival held in Peterborough. They won the title in Sarasota, Florida in 2014, and in 2018, won a hard fought battle to again defend the title at the IBCPC Festival in Florence, Italy.

Martin and Sleep shared their very first paddle on the Henley course in St. Catharines in 2006.

“It poured buckets,” said Sleep, recalling their efforts to bail out the boat at the start and finish line.

“Just when you thought it couldn’t rain any harder, it did.” She had just finished breast cancer treatment when she set out for the brand new adventure.

Sleep’s husband Blyn was more than a little uncertain about the risks that day and brought his own boat out to keep a close eye. “It’s like the 401 out there,” he told Judy-Anne, nervous for her safety.

“We didn’t know what we were getting into. I’d never seen a dragon boat before.” But it wasn’t long before Blyn was calling the beauty of the sport “poetry in motion,” and has since been driving the safety boat at every event.

For Sleep it was an overture to an addicting love of the sport and she met women who had been there for each other through really tough times. “You never really know what you can do until you do it.”

For Martin, sports was something her sisters did. “It wasn’t until I started dragon boating that I realized how competitive I could be.”

“We were the newbies and our veteran team members cheered us on, convincing us that we could do it and believing we could be strong.”

Word of mouth brought Short to the team in 2016. “I was looking for something to do physically after recovering from breast cancer treatment and was intrigued by the sport.”

“Being with other women who had gone through a similar experience and wanting to move forward and feel stronger, I had no idea how passionate I would become about the sport and also how attached I would become to these incredible people,” Short said.

“This allows us to put the medical experience in the background and we move forward.” But they know they have the connection with each other when they need it.

It’s also a support connection for team members’ partners. “Often the people who support you are struggling as well,” Short said.

“It’s like having an extended a family and 44 extra sisters,” says Lorraine’s husband Jim Martin. “They all have their own stories of how they’ve dealt with surgery and radiation and now they’ve stepped up and they’re not just survivors, they’re athletes. It’s a transition you have to see to believe. They’re quite the crew.”

“To have success you need to be working in synch. We paddle together, we have one stroke together and it’s one heart together,” Short said.

On the water, all eyes are on their fearless leader Kathy Levy who founded the KAB dragon boat team of breast cancer survivors in 1998 and has since been the inspiration for every dragon boater on the team.

“We can see huge transformations. We believe in ourselves and we believe in each other and that gives us the strength to survive and strive,” Short said.

“Kathy is all of our inspiration,” said Sleep.

The Wascana Lake setting for the Canadian Nationals was absolutely beautiful Short said of the July competition with six teams from across Canada that earned them the berth for the 2020 Club Crew world championship races.

The first day the winds were so high the races were cancelled. “The girls were set to race on the Friday but didn’t get on the water.”

They had gone through the warm ups and mental preparation only to be sent home. There were no breast cancer races scheduled for the Saturday. The pressure was on for the Sunday and they won the final 500 metre race.

“We knew we had a good start,” Short said. Levy was in position in the bow, “so we can see her face. She is the one who is coaching and can see the positions of the other boats. We focus on looking forward and staying in stroke.”

“When you get halfway, my job is to call for power, which I did about three time in the race and everybody digs in harder.”

About 30 strokes out the coach calls for the finish. There is a simultaneous change in the body position of the team, “leaning forward and pulling as much water as you can.”

“Kathy is tiny but she has a huge voice on the water. And we just know to stay focused and do whatever she asks to the best of our ability.”

“At the end of the race, gasping for air we looked at Kathy and saw her smile. We knew we had won.”

The KAB dragon boaters are a diverse group of women but they share the same life-changing experience of breast cancer and the dragon boat is a symbol of their survivorship and strength.
The team has about 40 members with ages ranging from 43 to 73. Some are 20-plus years survivors, others are just finishing cancer treatment and dealing with the side effects – they all have a seat in the boat.

“When you race at the Nationals you are trying to win a berth to go to the Club Crew world championships,” said Short. KAB will be competing against the top teams from around the world.
The KAB dragon boaters train year round, twice a week on the Hamilton Bay out of the Macassa Bay Yacht Club. “They are a great support for us,” Short said.

The KAB dragon boaters are in the tank every Saturday at the International Flatwater Centre in Welland, where they train with the Welland Warlocks and their coach former Olympian Doug Jones. They train as well at the Hamilton YWCA, developing technique and cardiovascular endurance and strength.

They’re up against teams that have year round access to water.

Even though they practice in the tank it’s not the same as on the water, learning to work together and manage water conditions, so the more practice they get the better.

KAB held its first meeting at the Breast Cancer Support Services office in Burlington, Ontario in 1998.

Starting with a small group of breast cancer survivors, Levy, also a survivor, formed the KAB dragon boat team in the fall of 1997.

Age, athletic ability and paddling experience did not matter.

The team was comprised solely of women ranging in age from 30-65.

The only criterion to membership on this unique team was that a person had a diagnosis of breast cancer.

They began water training in Hamilton at Bayfront Park in May, 1998 and are proud owners of two dragon boats docked at Macassa Bay Yacht Club in Hamilton.

They’ve since earned their place as top competitors traveling to local, national and international venues, promoting athleticism and sportsmanship at its best.

“It is an approach to promoting health and raising breast cancer awareness that is driven by women with the disease. It reaches out to other women and offers them a message of hope and support. It is helping to change attitudes toward ‘life after breast cancer,’ and it encourages women to lead full and active lives. It is making a difference,” McKenzie said in a 1998 research paper in the Canadian Medical Association Journal.

KAB is a non-profit, breast cancer dragon boat team which receives excellent community support in a range of areas: