(To view our May/June 2019 issue of ClubWEST online, click here.) 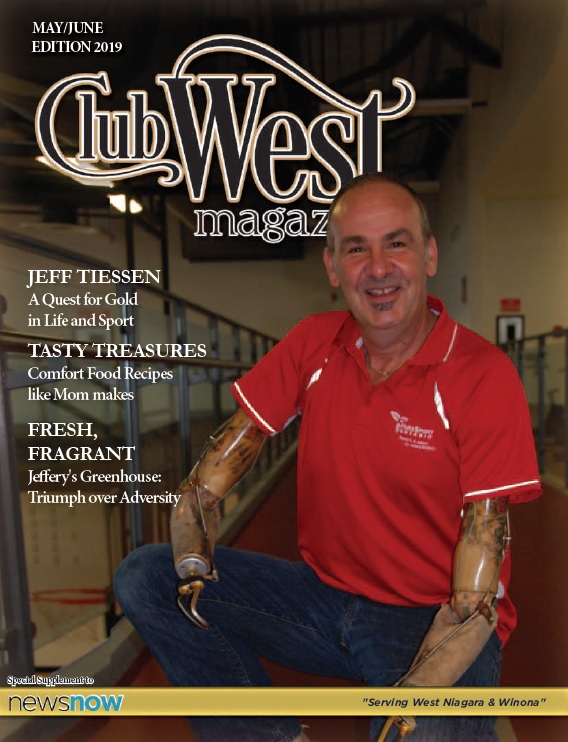 If nothing else, this edition of ClubWest Magazine presents two stellar examples of persistence – very different, I grant you, but both make very strong cases for pushing through adversity and never giving up.

We’ve all been kids at one time or another. We’ve done silly things, taken risks (some more risky than others). The vast majority of silly adventures end up as amusing anecdotes for us to tell when we are older.

For the most part, these missives don’t end in tragedy or serious accidents, however, some do.

Case in point is Mr. Tiessen’s tobogganing accident after a much-larger than-normal snow storm. The added precipitation made it possible for his ride to clear a fence sending him into a hydro transformer compound.

The rest, as they say, is history.

But Jeff has not allowed history to dictate to him. He has made his own history and, simply, made history with world record times in his paralympic track and field exploits.

He must have thought “why me?” at some point in his life, but those days have long passed by. Today he is a relentless advocate for those who face a wide variety of challenges and a beacon of hope for those same folks.

With Jeffery’s Greenhouse, no business survives more than a couple of years without peaks and valleys along the way. To survive three generations? That is a whole other matter.

Continued to success to both! Enjoy their stories.

(To view our March/April 2019 issue of ClubWEST online, click here.) 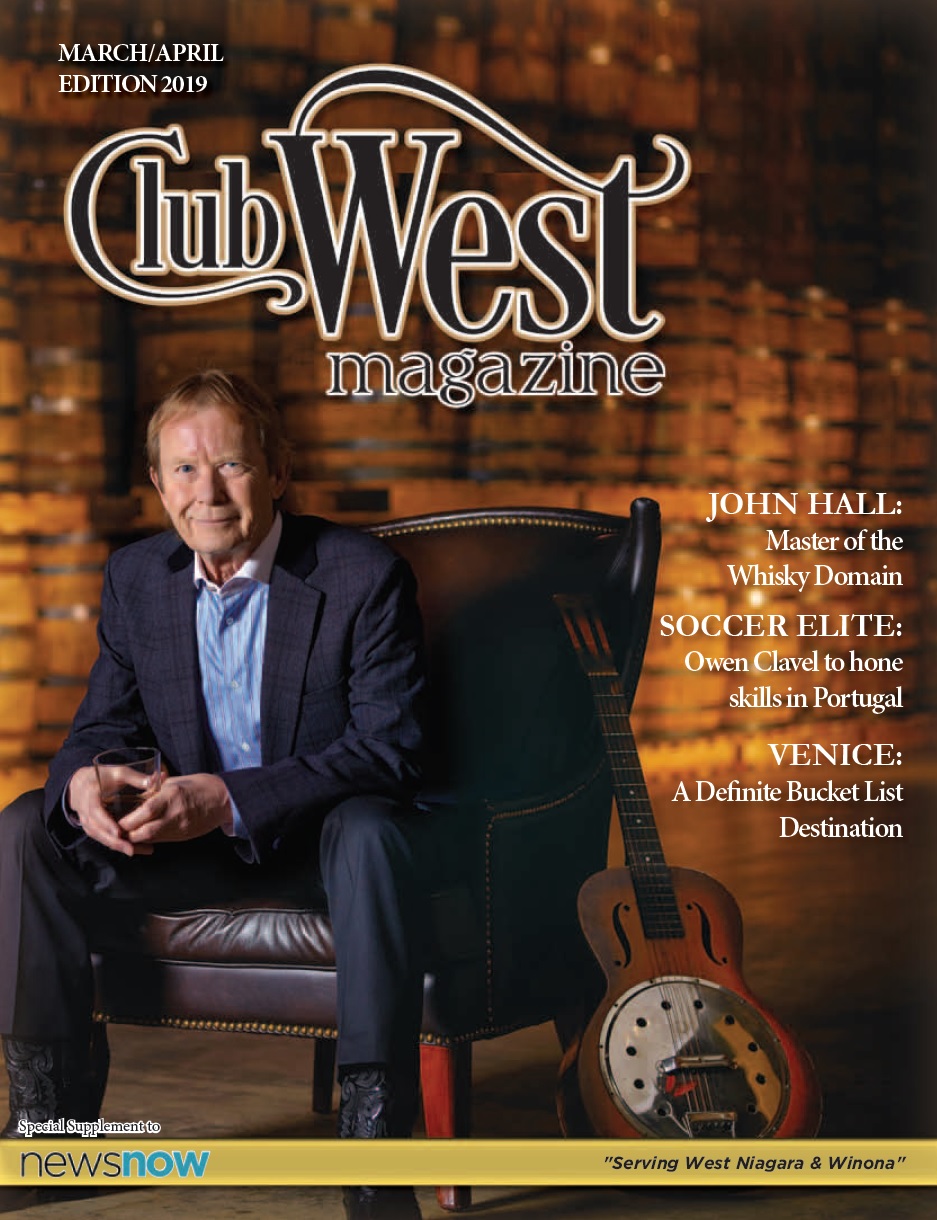 The chances are slim, but there may be a possibility John Hall and I are twins separated at birth.

No, not literally, but we sure think alike.

Having had the opportunity to speak with John many times over the years, I always learn something new and I listen keenly for his little anecdotes tucked into the fabric of his stories. That truly is the good stuff.

Creativity, focus, customer first, branding and, above all, providing a quality product to back up all those areas of strategic planning – in reading this edition of ClubWest Magazine’s lead feature you will gain some insight into how John did this.

In some small way, I would like to think I have followed this blueprint. It will be nine years in May in an industry with a 95 per cent mortality rate for start-ups in the first year and I have done that twice now, so I’ll take that.

While John does provide an excellent road map to success, a proven, tried and true formula to develop a great company with dedicated employees and a loyal customer base, few – if any – could aspire to the level of success he has managed to achieve.

Yes, he sold his company for an incredible sum, more than $185 million, but it was what he did for an entire world wide industry and Canada’s position on that stage which is staggering.

There is no need to rehash the content of the story but to say John and his team moved the needle for the Canadian whisky category would me a major understatement.

There are many thousands if not millions of successful businesses in the world, but few actually change mindsets, generate exponential growth and restore vibrancy to a dying sector.

That is the stuff of Hollywood scripts.

How many of you have seen the 40 Creek Distillery ads on during a Maple Leafs game?

Campari, as John notes, has done very well by Grimsby and their business by shining such a classy light on the legacy of their product line. Having a story to tell and exploiting that heritage are two key marketing points in promoting alcohol. Think of the story told of Appleton Rum, also a Campari product. Unique stories stick in the minds of consumers.

With 40 Creek, John’s efforts will be the story which drives the company for decades into the future and that is something for which he can be proud and the whole community can take pride in as well.

Few people get into any Hall of Fame, let alone have a Hall of Fame created just to accommodate them…yes, I embellish slightly, but John Hall deserves it!

(To view our January/February 2019 issue of ClubWEST online, click here.) 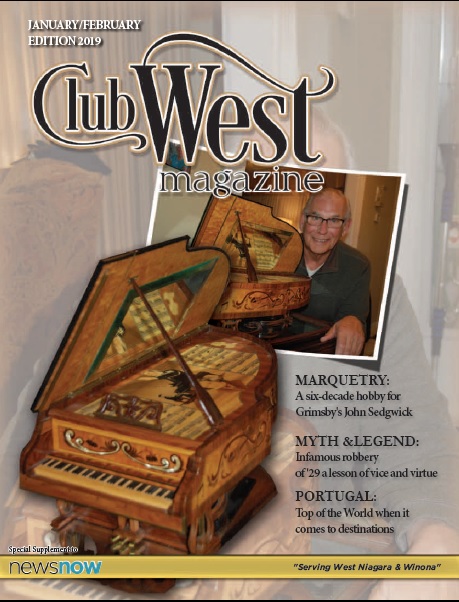 There are people with hobbies and then there is John Sedgwick.

John is the embodiment of what we love to showcase with ClubWest Magazine. Our goal, from the outset, has been to tell the stories of those whose passions, pursuits and past times dominate their lives.

After 60 years of honing his marquetry skills, one could surmise John has a passion for his craft.

And he is awesome at it!

Countless people invest all kinds of time, money and effort in the things which interest them – and as well they should.

Not everyone obtains a level of expert or even good at some of the things they do, and it does not matter one bit.

Take a beer league hockey…some may be better than others, but so what. It does not change either’s love for the sport or the joy extracted from a night of skating and camaraderie before and after the game.

It is quite likely there are others who have the same sort of passion for marquetry – defined as: a technique where various wood veneers are precisely cut to create a design. Yes, I had to look it up to be sure I understood.

However, John has developed his skills to a master craftsman level. That goes far beyond the level of an occasional workshop jockey. And good on him!

Even our contributors fit that passion mold. Our travel writer, Lorraine Simpson, and our Chef in Residence, Jan-Willem Stulp, are two perfect examples of people who have a passion for something and opted to make a career out of it.

As well, Joanne McDonald, much like myself, wasn’t just bitten by the writing bug. We were consumed by it.

All of us love what we do. Speaking for myself, I cannot imagine doing anything else.

In the writing game, it is difficult to attain a true standing as a master of anything. You are only as good as your last story.

Lorraine has travelled the world filling a suitcase with an immense and intimate knowledge of some of the best places to see, stay and enjoy. Jan-Willem? Just read his articles and you can see how personal creating tasty dishes is for him.

Much of what he does and how he does it ties to his upbringing and experience for European flair but with LOCAL ingredient influences.

People love this little magazine because of the unique stories we tell of people who are putting a great deal into life, told by people who love what they are doing.