(To view our May/June 2017 issue of ClubWEST online, click here.) 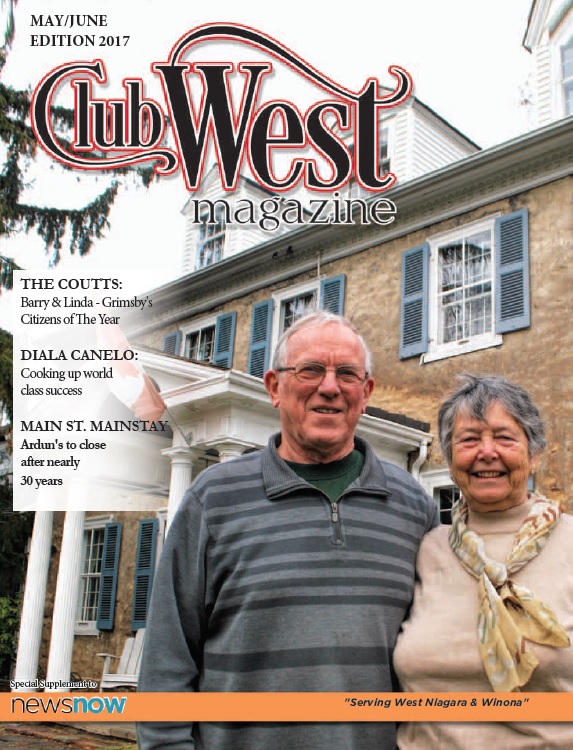 Magazines, unlike their industry sisters, newspapers, can often have themes which harmonize pages from cover to cover.

This edition of ClubWest does not follow that scheme in the slightest. In fact, it is probably about as diverse as could be conjured from the topics in Niagara West.

What can be said about the Coutts that has not already been said. Simply lovely people who have as dedicated a passion forhistory and their Nelles Manor as they possess for the Town of Grimsby itself. Absolutely deserving of their Grimsby & District Chamber of Commerce honour. Good on the Chamber for recognizing them as well as Junior Citizen Neha Gulati.

While the Coutts feature drips of history and interesting story lines, Diala Canelo is at the opposite end of the feature spectrum – working mom travelling the world as a flight attendant, who happens to a highly trained foodie.

She has managed to combine those two areas of interest to become a bit of an internet sensation who is about to parlay years of groundwork into a cookbook.

For an interesting twist on top of all that, the author of that piece, Isabella Gilmore, just happens to be Diala’s daughter.

Isabella will be working with me for the next few months and will continue with her post-GSS studies at Sheridan College’s journalism program this fall. She offers an excellent first piece and her mom should be very proud.

Down the middle of these two polar opposites, you have the Dunns who, after nearly three decades on Grimsby’s Main Street plying their trade in the jewellery business have opted to retire. In speaking with Rob and Pat last month it is clear they still have the passion, but the timing was right, and good for them.

It was interesting to hear them relate the transitions in their industry which have emerged over their careers: supply chain dwindling, technology, sales habits and more.

Their comment about consumers having less interest in quality in favour of lower prices is a universal cry of most craftsmen who are finding the going significantly more difficult. If the 90s were considered the start of a disposable society, today that atmosphere has exponentially grown.

Toss in a little fishing expertise from Brent Bochek – along with a little culinary spice from chef Jan-Willem Stulp and we have another successful recipe for and excellent read covering all things homegrown right here in Niagara West. Enjoy!