(To view our January/February 2015 issue of ClubWEST online, click here.) 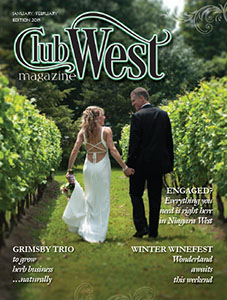 In life’s travels, it is always a positive thought to treat everyone nicely, professionally and fairly. One just never knows who might circle back and work their way into our life for a second time, or even on a permanent basis. It was a long time ago, 18 years to be exact, the first time I met Andrew Best and Jason Ginsburg.

I was just about a year into my gig at The Grimsby Independent when the duo dropped in to bounce an idea off me. Having been around long enough to know there are no bad ideas, I listened to the boys’ vision for a new column for the paper. To give you a little a perspective good reader, this was before internet. Their idea was a column filled with brain teasers, number riddles and the like.

In nearly three decades in the publishing game, I would guess I have had hundreds of such proposals offered in my direction. This was the most innovative and took a lot of thought because these young lads had created everything they offered. It was not a situation of today where they could Google “riddles” and pages would appear.

Fast forward to this past summer. I received an email from Andrew letting me know he was living in Shanghai and would be returning home to continue development of a new company. It was a company he, along with his brother Addison and Jason could have launched from any place since its initial focus is online. The trio believe it is important to give back to the community from which one receives so, as it grows, their operation will be Grimsby based. You can read all about it right here in ClubWEST.

Speaking of new things…here we are in a shiny new 2015. That can mean only one thing: new years resolutions geared to fitness. Enter Katherine Preston. This is another lady I have known for a long time, another ball of energy and a class act. She is not just about exercise, rather, the whole ball of wax. Diet and lifestyle choices are also integral. Be sure to check out her information in this edition.

You may want to commit that information to memory before reading about all the tasty treats Beth Ashton of August Restaurant is cooking up. August has only been around six years, but has almost instantly earned a spot on everyone’s must-visit list. August is another example of “it’s nice to see good things happen to good people” because Beth and partner Clayton Gillie are top drawer folk. This edition’s chef feature covers some delectable comfort foods Beth has offered at their King Street eatery. If I was you, good reader, I would skip right to the slider page (Page 21).