(To view our March/April 2017 issue of ClubWEST online, click here.) 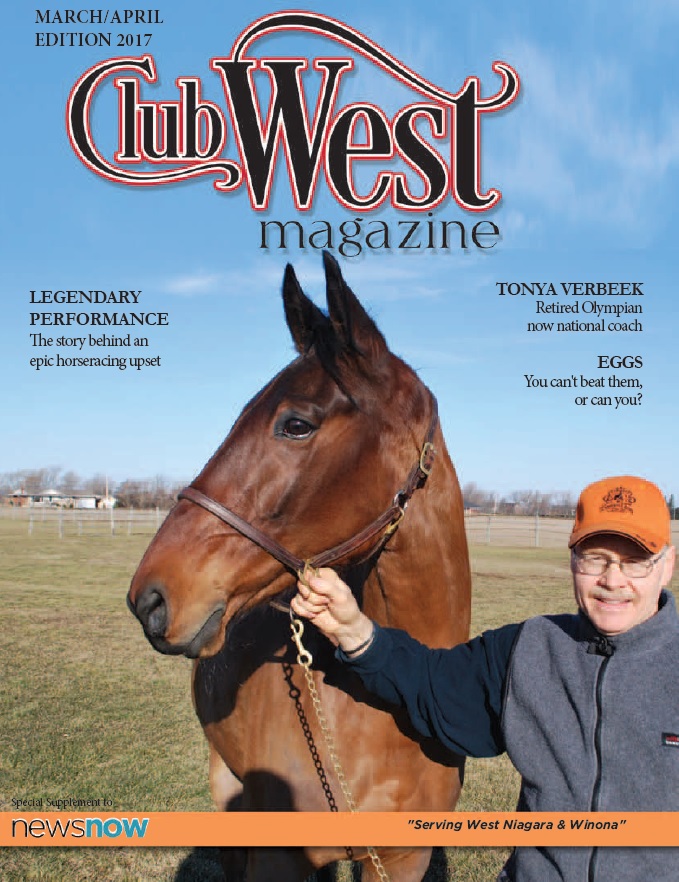 This edition is dominated by two very different champions.

Key among those championship traits is heart.

You can’t coach that into a person and you cannot train it into a race horse.

Tonya Verbeek, a self-described technician of wrestling, showed time and time again during her illustrious career that her undying will to win helped her overcome some excellent quality competition. The result of which placed her on podium after podium around the world.

For Modern Legend, a harness racing millionaire owned by Grimsby’s Dave Drew who has trained out of Vineland all his career, he has managed to remain competitive at the highest levels of harness racing thanks in large part to the patience displayed by Mr. Drew, his owner, breeder, trainer and swimming coach.

In 30-plus years as a journalist, countless stories have been “penned” by this scribe. When it comes to winners, heart may be the only truly common characteristic on any consistent basis.

There are athletes in all disciplines who have unbelievable talent, gifts for which many would die.

Granted, they may do quite well, but intestinal fortitude always puts them over the top. If you follow any sport it is quite likely you can think of several examples.

The whole point of this ClubWest Magazine is to tell the story’s of great things being done right on our own backyard and of things being done by people who are from this area. Tonya’s exploits are known around the globe due to her efforts in competitions all around the world and Modern Legend put Niagara on the map for a North American audience thanks to his racing prowess in Canada and the U.S.

Both are ambassadors in their own way. Both are entering different phases of their careers.

Tonya is now on her way as a Canadian wrestling coach, and good on her! When you work as long and hard as she did, it is great to see someone like that get a break and be able to continue on in a path she clearly relishes.

Modern Legend, now nine years old, is on the back-end of his racing career, but due to Dave’s stewardship he is still in great shape, so he may have a bullet or two left in that racing gun. One thing is certain, both are wished the absolute best in their future endeavours!